These are the major avenues through which KIND equips women and girls with information, tools and skills they need to participate as service leaders at all levels in society. Kudra is offered to young women in Universities while Junior Kudra is offered to adolescent girls in secondary schools.

Kudra is KIND’s leadership programme in higher institutions in Nigeria. Using this platform KIND works with young women in universities, equipping them with leadership tools and life building skills. Through a 5-day workshop and one-year participation in registered kudra clubs young women are empowered to engage in transforming their communities through community participation, build businesses, mentor others thus encouraging the emergence of a new generation of women leaders in Nigeria.

Kudra clubs were established in 2006 following the conclusion of the first Kudra training in the universities. The clubs exists to provide a safe space and platform for the girls and young women who have gone through Kudra to engage with their communities and advocate for changes in behaviour that promote community development. Besides the training, the program provides for Kudra clubs (meeting hubs) in the schools. Alumnae of the programme remain connected through KUDRA clubs established in the Universities and Young Women Leadership Network (YWL). Kudra Clubs have been sponsored by The Emerging Markets Foundation Ltd (EMpower). Click here to view photos of Kudra Entrepreneurs.

Nigeria’s Exemplars Of Love and Forgiveness

Nigeria’s history is replete with years of intra and inter-communal crisis, religious and ethnic unrest, as well as crisis from political instability and insecurity. This period is indeed a trying time for the nation when we consider the scope of crisis, particularly the level of insecurity. Our conviction lies in the ever-increasing transformative impact that love and forgiveness can have on conflict situations raging between two individuals, communities and the nation as a whole.

Therefore the goal of this project is to recognize, learn and share from, and contribute to the process of community and individual peace building initiatives by peace actors working within communities in the six geo-political zones of the country. Through nominations and personal contact, we’ve identified individuals who are exemplars in promoting love and forgiveness; and we’ve also offered a platform for exchange of ideas and opportunities, and provide avenue for interactions with practitioners and the general public towards broader application of the lessons from the work of identified exemplars. Learn more>

Interlink is the major avenue through which KIND works with other organizations and individuals with similar vision. The program promotes joint action between international and local organizations on projects aimed at fostering a public environment that enables women’s public participation. The program uses cultural expressions and other means to cause a shift in attitudes and practices that work against women’s participation in society. In the last three years, KIND’s main activities under Interlink are:

30 by 15 (formerly 30 by 11) Campaign to secure favourable rules for women’s political participation. Through the campaign, KIND works with partners to build capacity of women political aspirants while advocating for political parties and government machineries to include women’s issues in their agenda. The campaign also trains and provides mentoring opportunities for young women interested in political participation. 30 by 15 was launched in 2006 and has since worked with 250 women in Lagos, Borno and Cross River States. 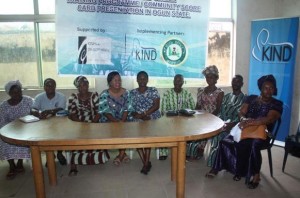 Social Accountability Project, also known as the Community Engagement and Public Participation project is to create an avenue for community participation and interaction at the local government level. Through this project, KIND builds the capacity of local government staff and members of the local community to engage in critical dialogues for development in health, education and environment issues in the state. The programme is currently run in thirteen local government areas in Ogun and Ekiti States and has reached 3500 people. View photos of the Social Accountability Project in Gallery.

Young Voices for Change Project (YV4C) is a UKAID funded development programme that is aimed at improving the Leadership, Decision making and Life-Skill competencies of adolescent boys and girls between the ages of 16 – 25 in post secondary institutions across Nigeria. The programme which is fully funded by United Kingdom’s Department for International Development (DFID), will run for 12 weeks (about 2 hours per week) during the 2013/2014 session.

This programme will employ the use of interactive virtual and physical platforms/forums, referred to as “safe space”. The physical “safe space” will be small, safe (single sex) groups through which young men and women will learn, reflect, discuss and take action. Young women and men will feel in a sense of community, share skills and ideas with one another, and in turn build each other’s confidence. They will also discuss issues that matter to them – from future careers and aspirations to healthy relationships. View photos of Young Voices for Change Project in Gallery.

I AM CHIBOK is a coalition movement which was founded following the kidnap of over 200 school girls from the Government Girls Secondary School, Chibok, Borno State of Nigeria on April 14th, 2014 by members of the Boko Haram sect.  Following the kidnap of these school girls, the management of KIND carried out a fact finding mission to Chibok in Borno State to ascertain first hand the state of affairs with that locality, especially as it affects women and girls.

This fact finding mission gave our team the ability to discuss with local women who have lost their homes and loved ones, and who has suffered atrocities from both the militant sects and the military. Following this visit to Borno State, KIND initiated a relief process for the displaced persons in the state and the entire north-east region. 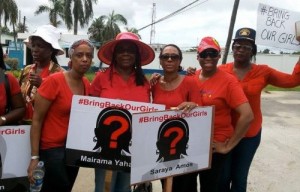 Through a partnering organization on ground in Borno State, we’ve been able to rehabilitate six (6) of the Chibok Girls that escaped from the sect, especially by providing first class medical attention to these girls in partnering hospitals in Lagos; facilitating the visa and passport expenses of another six (6) who will be heading to USA to continue their education; and are going ahead to rehabilitate more girls as they get free from the captivity of the sect. Our thanks goes to sponsors such as MTN Nigeria Staff, St. Nicholas Hospitals, and many more that are doing their best to ensure our girls are properly reintegrated into the society.

In other to keep the call for the rescue of the girls going, our staff has also taken on the maintenance of the Facebook Page for the global Bring Back Our Girls platform, where day counts continue to draw the attentions of people from various parts of the world to this issue. Visit the page > 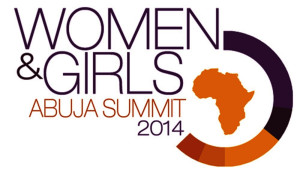 The Women and Girls Summit was an initiative of the National Centre for Women Development, Friends Africa and the Office of the First Lady of the Federation, with Kudirat Initiative for Democracy serving as a focal national partner. The summit was designed to create a platform for high-level dialogue on current issues affecting women and girls in Nigeria and Africa. The summit focused on four thematic areas, which include Health, Education, Safety and Security and Economic Empowerment. Over 1000 delegates (women) participated in the summit, ranging from high school students, tertiary students, professionals, business women, amongst others. The summit took place between the 13th and 14th of October, 2014 in Abuja, FCT.