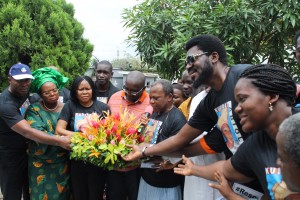 In the week of Monday 1st to Friday 5th June, KIND commemorated the 19th anniversary of the death of Alhaja Kudirat Abiola, pro-democracy activist and wife of the winner of the 1993 elections, Bashorun M.K.O. Abiola. This years’ event was hosted in partnership with the Women Arise for Change Initiative, under the leadership of Dr. Josephine Okei-Odumakin, a foremost civil activist during the military junta.

The event which was a sober reflection on the virtues and doggedness of the heroine for whom the Kudirat Initiative for Democracy was established to honour who was assassinated on the 4th of June 1996, was attended by distinguished personalities which include Rear Admiral Ndubuisi Kanu, former military governor of Lagos State and a NADECO Chieftain; Otunba Gani Adams, Leader of Oodua People’s Congress; Alhaja Ganiat Fawehinmi, wife of Late Chief Gani Fawehinmi; Nollywood Actors Ayo Badmus and Dejo the Comedian; sons of the late martyr Alhaji Jamiu Abiola and Mr. Abdulmumuni Abiola; amongst others. Also in attendance were students of the KUDRA Club in three different schools – Ifako Comprehensive High School, Gbagada Grammar School and Lanre Awolokun High School.

In the words of Dr. Josephine Okei-Odumakin,

“It was only after Abacha demise that the snipers of that evil regime started to confess to the barbaric act of murdering an innocent and harmless woman. Kudirat would forever be remembered for her stout defence of the right of the people to choose who lead them and a rejection of the reign of jackboot in Nigeria. Alhaja Kudirat stood as a colossus among the army of democracy who stoutly resisted the unjust diktat that is the annulment of June 12 elections.”

In the words of Alhaji Jamiu Abiola,

“…in America, there are only two Africans that streets have been named after them; first is Nelson Mandela and the second is my mother, because over there they know the value of what you did. Mum, we’re proud of you, you and Nelson Mandela, they put you both at the same level and that is enough for your children.”

In the words of Otunba Gani Adams,

“I will employ the Federal Government to recognize this woman in Abuja. Lagos State has done its own in naming a road after her and setting up a statue in her honour. What happened in the history of June 12 and what we’re doing here today will not encourage any leader being in power to involve in any killing against innocent Nigerians.”

The event came to a conclusion with the laying of the wreath on the grave of the late heroine which was led by the NADECO Chieftain, Rear Admiral Ndubuisi Kanu and other distinguished guests.

The IE Guide was developed after END_OF_DOCUMENT_TOKEN_TO_BE_REPLACED