At the press conference held at the KIND office by the Movement Against Corruption (MAC) it was explained that it is a coalition of over 35 Civil Society Organizations (CSOs) and Activists in Nigeria, established with a clear mandate to develop and execute practical strategies geared towards the prevention and eradication of all forms of corrupt practices and abuse of power, in both the public and private sectors of our country.
In achieving this patriotic objective, the MAC is determined to sensitize Nigerians on the immediate need to possess ownership  of the war against  corruption  in the country,  by getting involved in its  advocacy, and educate each other on the cancerous effect of corruption on our polity.
In actualizing our ambition of leading this crusade against corruption in our country, we have resolved to reject any form of policy or  legislation from any tier or arm of the government, aimed at encouraging acts of corruption, particularly those designed to shield corrupt elements, and giving amnesty to those indicted for corrupt practices.
We are also determined to mobilise Nigerians  to demand judicial accountability by campaigning against the increasingly slow pace of action of the judiciary in the prosecution of corruption  related cases, across various courts in Nigeria.
MAC, as part of its effort, shall encourage the sponsorship of legislations that will strengthen the various anti-corruption agencies in the country, while also rejecting any attempt, particularly from the  National Assembly, at foot-dragging in making legislations  aimed at strengthening the fight against corruption. We shall be giving specifics on these legislative manoeuvres subsequently.
We therefore wish to state, that as child of necessity, MAC will galvanise the Nigerian people towards an efficient anti-corruption campaign through rallies, protests, sensitisation, workshops and other forms of civic and democratic engagement.
This Movement is birthed in response to the imperative for Civil Society Organizations (CSOs) and the Nigerian people, to have a common, formidable and organised platform through which they can frontally confront the cancer of corruption which has bedevilled Nigeria for decades.
We hereby want to intimate the general public that as
part of our  action plans, we shall be holding a march  against corruption with the theme ‘’RED CARD AGAINST CORRUPTION’’ on the 30th day of  August ,2017 in Lagos and  Abuja. And today, marks the beginning of our 10day- countdown, to this historic march against corruption in our country.The  countdown period shall be used to sensitize Nigerians ahead of the scheduled August 30th date, of the rallies in Lagos and Abuja.
The Lagos rally shall take-off from Ikeja under bridge by 7.30am while that of Abuja shall take – off from Unity Fountain simultaneously. This shall be followed by similar marches across cities in the country, at later dates, to be announced soon by MAC.
Below are pictures from the march: 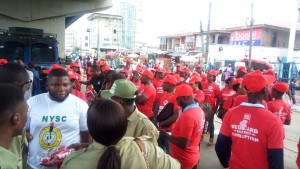 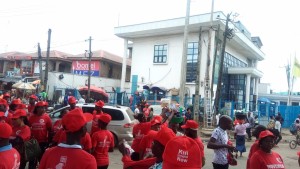 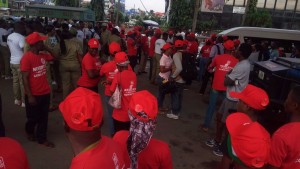 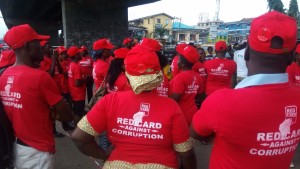 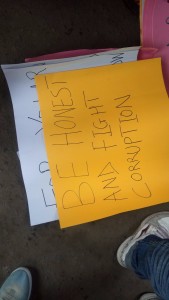 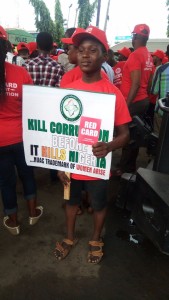 The IE Guide was developed after END_OF_DOCUMENT_TOKEN_TO_BE_REPLACED